Don’t Fall Into This Trap!

One of the biggest challenges our teams hear when it comes to fleet expansion – no matter the size of the company – is the initial costs of the vehicle.  After all, even a new cargo van can go well past $30K, and a fully loaded one ton diesel dually will push $100K.  Unless you’re one of those billionaires flying into space these days, that’s a lot of money.

For a lot of businesses, then, the temptation is simple – save money by purchasing used.  Why not?  Prices are lower, warranties are often still in force, and with today’s high-quality engines and drivetrains, the stigma of even a “higher mileage” engine isn’t what it once was.

We’ve seen hundreds of diesels going past 500,000 kms without having their engines opened up, and even today’s gas V8s are capable of pushing past 300,000 and still proving reliable.

Something funny happens to many buyers when they choose to purchase a used truck or van, though.  Many times, they fall victim to a mentality of thrift, where their brains “cheapen” the purchase and won’t let the buyer upfit the truck or van they really need.   Sure, they’ll do a few things, but many times they won’t go “all in” and upfit the truck they require.

In our experience, it’s one simple thing – they don’t think the truck is “worth it.”

In some cases – that $1,000 beater you drive when the salt is laid out thick after a blizzard – that makes perfect sense, and we’ve ALL done the “winter beater challenge” before, but what about that one-owner 2005 Isuzu NPR box truck with 129,000 km on it?

That truck sells for $50K or more new and has remained virtually unchanged since 1988.

Who wouldn’t buy it?  Especially if it serves your needs and helps to move your business forward.

And yet, time and again, we hear new owners of used trucks and vans worry about upfitting those vehicles to make them more useful, safer, and more efficient for their businesses.

Our advice in cases like this is simple, and we’ve actually got several important things to think about before you buy a used truck or van.

For starters, any “great deal” HAS to have a good base to build on.  Not only does it need to be in good shape, but it’s got to have a reputation for reliability.  Now, we’re not going to get into brand bashing here, but certain drivetrains are simply better than others.  It’s a known fact that, for example, the old GM 6.5 diesels had some challenges with overheating and injection pump failures.

The Ford 6.0 diesel had a few issues, too, and as hard as it is to believe, the original Cummins offered by Dodge still has an active recall on the Bosch injection pump on those motors.

And yes, we’re picking on “old” powertrains so we don’t make anybody mad…

So, first things first, do your research.  You’re the only one who can decide what your level of comfort is for addressing possible powertrain reliability – and since this is a work vehicle, it’s GOT to run.

Next, of course, is the overall appearance of the truck or van.  Sure, it’s a work truck, but it’s also your reputation.  Body damage, rusted out quarters, and faded paint aren’t going to “wow” your clients, so again, decide what you will accept or what you’ll accept to repair on your own.   Inside?  Same thing.  A torn seat not only looks bad, it’s also not comfortable.  A good set of properly fitted seat covers can go a long way.

Along this vein, we’ve found a lot of companies that have repurposed and freshened up used vehicles by “wrapping” them in vinyl.  Done properly, it’s not cheap, but it’s still far less expensive than a repaint.

The next step is the hardest one.  Digging in to determine the best course of action for upfitting.  Some models simply don’t have the aftermarket support that others do.  In some cases, it’s due to age, in others, the deciding factor is market share.  As good as the Nissan Titan is, for example, it never captured the sales numbers that North American brands have traditionally had.  It’s a well built truck, but on the used market, it’s easily forgotten in a veritable sea of half-ton models.  On the other hand, although no longer being produced,  the Nissan NV series cargo vans were popular and there is a lot of aftermarket support for them in terms of upfitting.

At this point, it’s time to get a clear picture of what – exactly – you want this truck or van to do.

What job(s) does it support?

HVAC?  Plumbing?  Painting?  Hauling heavy hot shots to the field?  Or will it be used by administrative or sales team members in downtown areas?   In just these examples of the work that can be done, there are dozens of trucks and vans that could fill these roles!

This is where the team at Expertec can truly support you.  We’ve built a complete checklist – Build It Before You Buy It – to support customers who are considering buying a used truck or van to repurpose and upfit for their business.  As you go through it, feel free to discuss your fleet and upfitting needs with our team to get an in-depth look into how to effectively rebuild a used truck or van to perfectly fill your fleet’s needs.

There’s absolutely NO reason to not buy used, especially as scarce as new vehicles are (and the prices of them these days!) 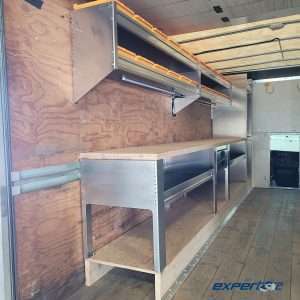 Don’t believe us?  Check out the pictures of a recent (re)build we did on a cube van to support furnace installations.  This was a real blank canvas, and even though there was a lot of custom work to be done, as you can see, this upfit provides ample room for a workbench, storage for both ladders and pipe, and plenty of light to work in.

As the current shortage of trucks and vans continues to impact businesses, rebuilding and repurposing older units is a great way to get the upfitted vehicles you need in your fleet.

If you’re ready to implement this strategy in your own business, feel free to call our team at 1-888-435-6466 or simply click right here to reach out. 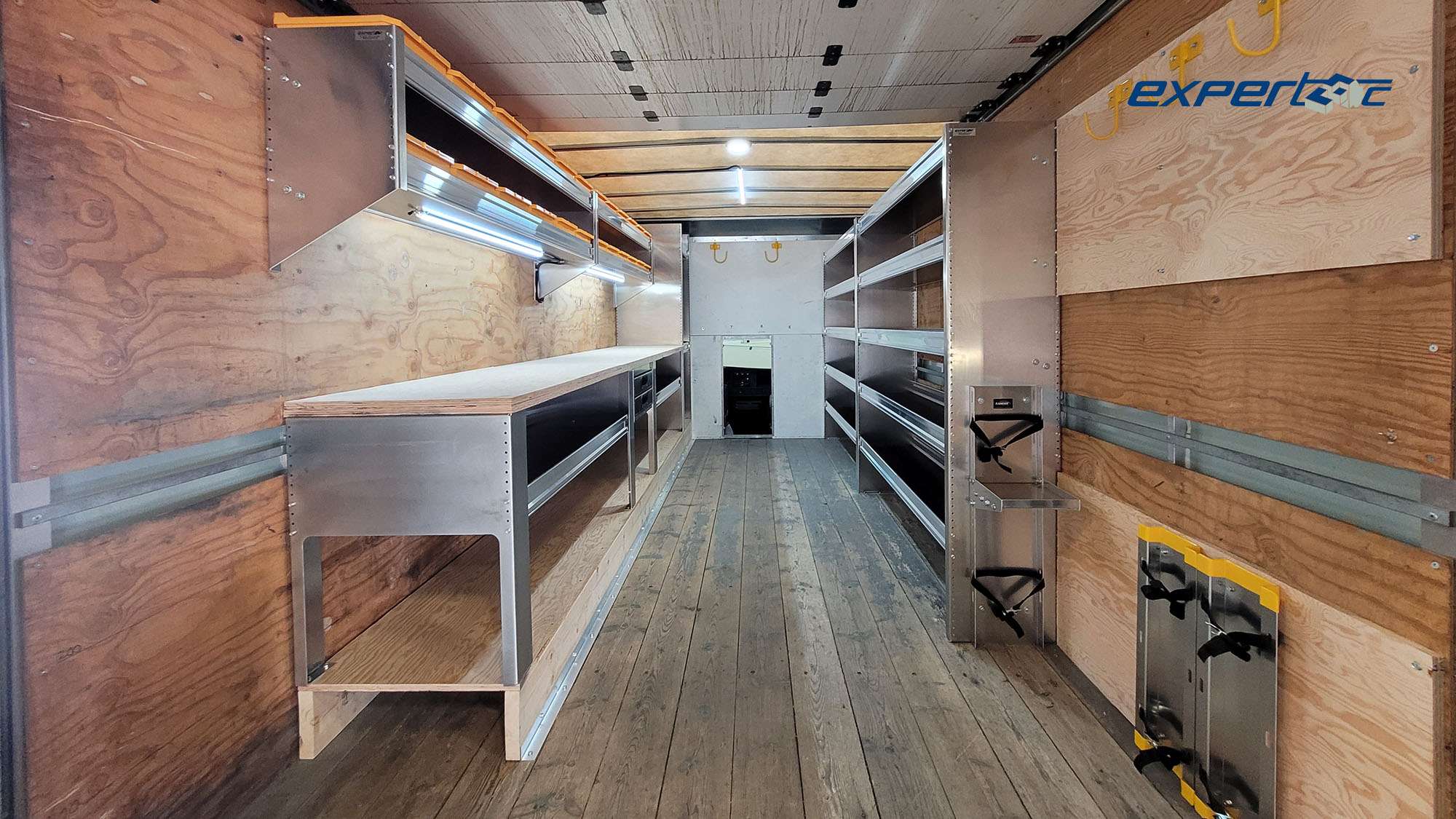